Highlight: Chinese culture has been exported worldwide, mostly due to extensive immigration from China, creating large expatriate communities that are keen to practice traditional values while embracing the lifestyle and cultures of their adopted homelands.

Chinese culture and lifestyle is promoted throughout the world thanks to the rich and vibrant Chinese immigrant communities located in nearly every country. The Mandarin word for people of Chinese heritage living abroad is 海外华人 (pinyin:Hǎiwài Huárén).  Indonesia, the United States, Malaysia, and Thailand have the highest number of overseas Chinese, each with over 3 million citizens of Chinese heritage. Throughout generations of immigration, these communities have assimilated well into their host countries, but some of the larger overseas Chinese communities still practice traditions and celebrate festivals and holidays from China.

This is particularly true in New York City, which has a Chinatown in Manhattan that boasts the largest ethnic Chinese population outside of Asia, and a large and growing Chinese community in Queens. Chinese people have been immigrating to America, and New York City in particular, since the mid-1800s, and todayChinesepeople make up the third highest percentage of annual immigrants to America, after Mexico and India. In 2013, nearly 20,000 immigrants from mainland China moved to New York City, more than the next two major American Chinese immigrant destinations, Los Angeles and San Francisco, combined. 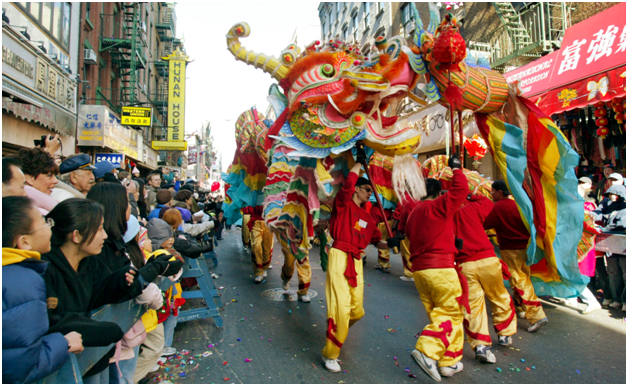 Chinese culture is kept alive in New York City through institutions such as the New York Chinese Cultural Center, which offers classes in Chinese martial arts, visual arts, language, acrobatics, and dance. The Cultural Center also partners with more conventional American New York City establishments, such as the Metropolitan Museum of Art, Lincoln Center, and Queens Botanical Garden, to promote Chinese culture throughout all five of New York City’s boroughs. Similarly, the Museum of Chinese in the United States, in Manhattan, curates a variety of interesting exhibitions on the long history of Chinese immigration to America and New York City, along with the food, art, and festivals that Chinese immigrants have brought to America and that have disseminated into mainstream American culture.

The Chinese New Year Festival is a particularly enjoyable and well-attended event in New York City, bringing together hundreds of thousands of people representing the diverse conglomeration of the city’s population annually since 1999. Politicians, celebrities, and international tourists have been known to frequent this yearly celebration, and it has become a much-anticipated and beloved aspect of life in New York City.

Chinese culture has been exported worldwide, mostly due to extensive immigration from China, creating large expatriate communities that are keen to practice traditional values while embracing the lifestyle and cultures of their adopted homelands. Nowhere is this more true than in New York City, where the largest Chinese immigrant population in the Western hemisphere has helped introduce Americans to Chinese culture for over 150 years.